A simple dish  full of spices. 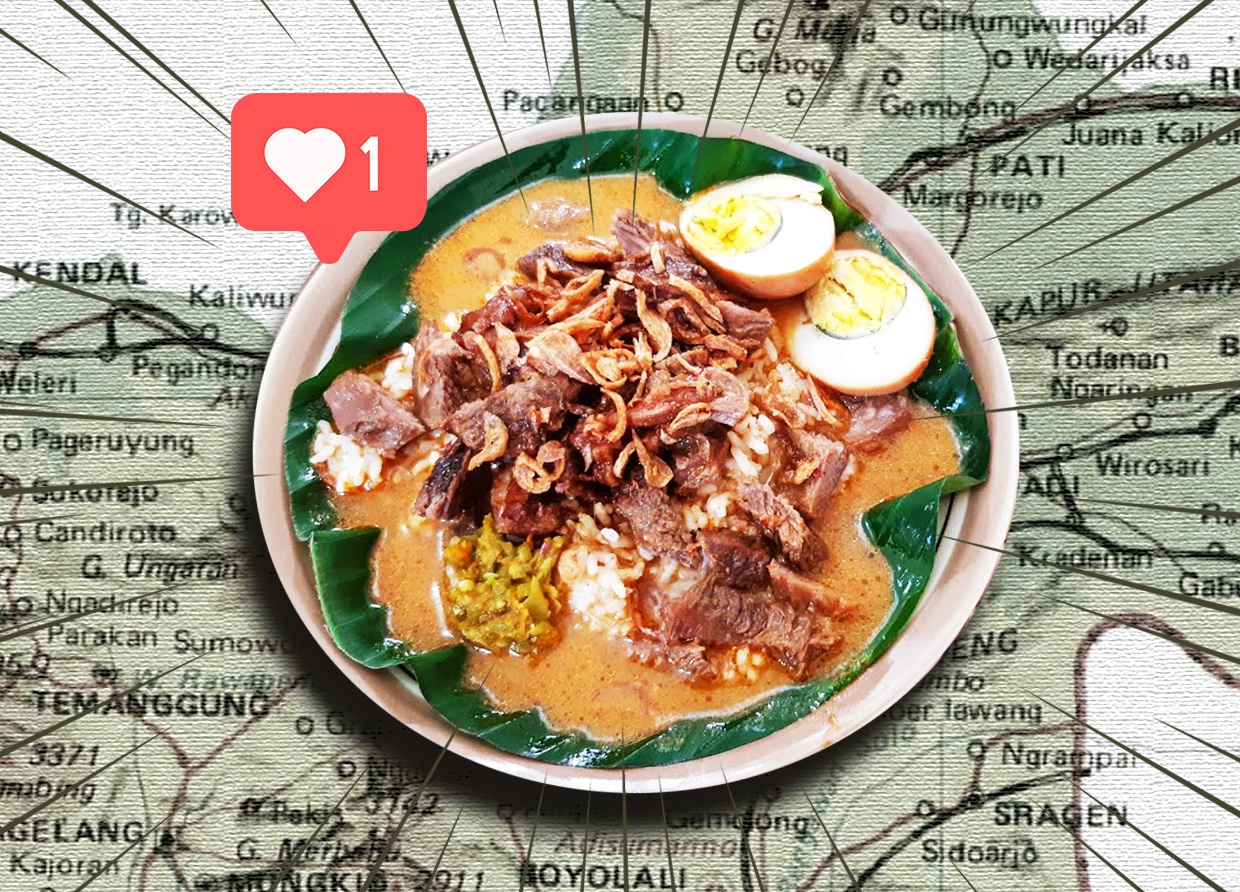 When you visit Pati, a city that is around 80 km from Semarang, don't forget to try sego gandul. It’s very popular in Gajahmati Village. At first glance, it looks like a beef stew, as its sauce colors brown with slices of meat.

Sego gandul is a simple dish. It consists of white rice that is doused with gandul’s dressing, then sprinkled with slices of beef. Usually, sellers provide other side dishes to satisfy your stomachs, like fried tempeh, tempeh and tofu bacem, perkedel, bacem eggs, fried lungs, salted eggs, and egg satay.

In the first bite, sweet will dominate your tongue from its water. It’s like a semur (a thick Indonesian stew), but more watery. If you want sweeter, the seller usually provides soy sauce.

The signature of sego gandul spots on the banana leaves that is usually placed on the top of the plate, and we spoon the dish using a suru, spoon for banana leaves. Eating with banana leaves gives you an unforgettable experience, plus, the taste is more delicious! But for those who don’t get used to using suru, many sellers now provide regular cutlery, so don't worry.

Another reason why they use banana leaves is to keep the temperature of its water stable (not too hot, or not too cold).

Try an authentic version of sego gandul in Pati

The most popular place to try sego gandul in Pati is at Pak Meled. The location is on Panunggulan street, Gajahmati Village. The restaurant was originally run by Pak Meled’s parents since 1955 when they were still selling around the village.

"In the past, they used to sell using dunak (big basket made of woven bamboo). While walking around the village, the rice was wobbly when it was carried. At that time, there was an elderly figure in Pati, Mbah Rono, who said that rice that was wobbly when sold was called rice gandul," said Meled, as quoted by Detik.

Another place to try sego gandul in Pati is Nasi Gandul H A Warsimin on Roro Mendut street, Semampir. Aside from beef as its main topping, they also provide the gravel, lung, empal, and beef brain parts.

There is also Nasi Gandul Romantic H.S. Sardi who always make a long queue because they have fansbase. They have been selling since 1978, and have a consistent taste and never change from time to time. The price is also cheap, which is around Rp18,000-Rp20,000 per portion.

So how about you? What foods do you love the most in your hometown?